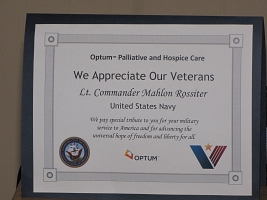 On Monday, September 22, I was invited to attend an informal ceremony on campus initiated by OPTUM Hospice staff to recognize another Tel Hai resident for his service to our country. Mahlon Rossiter was the honoree on this day; his room in the Meadows Health Care Center was filled with family and friends to mark the occasion.

The Hospice-Veteran Partnerships were established in November 2001 with a focus on improving end-of-life care for veterans across the country. The coalition joins Veterans Affairs facilities, community hospices, state hospice organizations and others to “work together to ensure excellent care is provided to our nations’ Veterans and their families.” Kathleen O’Connor, OPTUM’s Volunteer Coordinator, was joined by her coworkers and two instructors from the Valley Forge Military Academy who made the formal presentation. The men in uniform conducted the pinning ceremony, read the certificate of appreciation and presented Mr. Rossiter’s wife of 67 years with a small US flag.

The most important part of the ceremony was initiated by the instructors’ enthusiasm as they urged Mr. Rossiter to talk about his Navy experiences. His service was significant and long. Mahlon shared his path through flight training from 1942 to his commissioning in March 1945. “Then they dropped the bomb,” Mahlon added. Honorably discharged in July 1946, he was recalled to active duty with an antisubmarine squadron in March 1951 and was deployed to Far East duty aboard the USS Sicily. “Life on board was great!” he added emphatically. Honorably discharged again in 1953, he then served in the Navy Reserves, retiring in 1969 as a Lt. Commander having completed 27 years of military service and 3,000 flight hours. An impressive record, indeed!

We all were moved by Mr. Rossiter’s open appreciation of the life he has shared with his wife, Faye, and the touching recollections of each member of the Veterans Group in attendance. It was an honor to be part of this celebration of life and service. I can only imagine how many other wonderful “stories” are out there on campus waiting to be told.

PHOTO: Certificate presented to Mahlon Rossiter in appreciation of his long service in the US Navy and Navy Reserves. Mr. Rossiter passed away on Tuesday, September 30.

Join us on Saturday, October 15, 2022 from 10 AM to 4 PM for the 10th Annual ‘Explore Retirement Living Open House.’  We’ll be joining with several other communities in…

We’re all decked out for this joyous time of the year, and our residents are eager to share why they love the “Holidays at The Hill of Life” in 2022!…