A Reflection of My Visit to the Holy Land 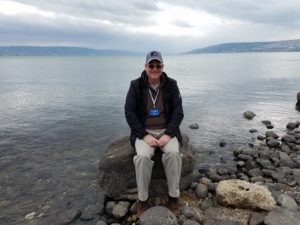 I didn’t know what to fully expect. Though I had served as a Pastor for more than 30 years and had taught numerous lessons from the Bible, I had never visited the Holy Land. It’s not that I didn’t have an interest in going. It just never made it to the top of my list of things I want to do. But when the opportunity came this year to go, I felt compelled to make the pilgrimage.

I really had no idea what to expect, but I was sure that whatever I would see would be old, dusty, and barren. I was sure I would see ruins of ancient archeological digs and churches that were built on sites believed to be authentic. I expected to be bombarded with a commercialized presentation of the Holy Lands. There was a little of that, but oh so much more.

What I didn’t expect was to be wowed with the beauty of Israel. It is a diverse and dynamic country only about the size of New Jersey, but full of ancient and beautiful places. We arrived during the rainy and cool time of year, so the ground was lush with vegetation and the hills and valleys were full of crops like oranges, mangos, bananas, figs, almonds, and more.

Because of the rain, it seemed that almost every day we were greeted with another sign of God’s majesty; signs like the double rainbow we witnessed on the Sea of Galilee, the majestic snow covered peak of Mount Hermon and the Golan Heights, the hundreds of storks migrating through the Jordan River Valley, and the crow of a Rooster at the site of Peter’s betrayal of Christ. Everywhere we went it seemed that God was with us, and that He had a message to give not only through the historical sites we visited, but also through the creation that still surrounded them.

Everywhere we went it seemed that God was with us, and that He had a message to give not only through the historical sites we visited, but also through the creation that still surrounded them.

Our guide for this trip, Dr. Willis Britt, mentioned that there are places on earth where the Spirit seems to pierce through the material world; “thin places” he called them. I found myself experiencing the touch of the Spirit of God at several of these ‘thin places’ in Israel; places like the Holocaust Museum and the Western (wailing) Wall, places like the Garden Tomb and the teaching Steps of the Temple, and places like the beach on the Sea of Galilee pictured in this blog.

I chose this photo because it was a place of special significance for me. It is the site where it is believed Jesus restored Peter to his call after the Resurrection. You may remember from the Bible that Peter denied Jesus three times before the Rooster crowed on the night of Christ’s crucifixion. Peter had been commissioned by Jesus as ‘the Rock’, the one who would have a special roll in leadership among the early church. But after Peter’s denial of Christ, though He was overjoyed that Christ had risen from the dead, there was still this sense that Peter had fallen too far and could no longer be considered as a leader. So he went fishing on the Lake. Jesus appeared to him, cooked a meal of fish, and asked Peter three times “Do you love me, more than these?” It was at this spot on the shores of the Galilee that Peter understood the forgiveness and grace of Jesus. It was here that Peter devoted Himself to the love and service of Christ.   You can see why that beach might have special significance for me. I still cry thinking about the goodness and grace of God to give Peter a fresh start.

Israel is a place where heaven and earth meet. It is a special place. It is a place that forever changed me and that I am so grateful to have been able to see and touch. Are there any ‘thin places’ in your life where heaven and earth have come together to give you a touch of the Divine?   If not, consider joining Tel Hai on our next trip to Israel. You won’t regret the decision.

Live More with Less Apartment Featuring 790 Sq. Ft. A home like the Garnet, located within StoneCroft Apartments, means that with 790 sq. ft., you have enough room to entertain your family and friends without useless spaces that create more cleaning and more work. Residents at Tel Hai are thriving in smaller spaces.  With just one…

Join Residential Living Counselor Tracy Weaver as she shares about Tel Hai at an in-person ‘Taste of Tel Hai’ event. Learn more about the Tel Hai lifestyle and decide if it could be perfect for you! In addition to a delicious, complimentary lunch and presentation, you’ll explore the residential living options at our community and hear…

4 Replies to “Where Heaven and Earth Meet”